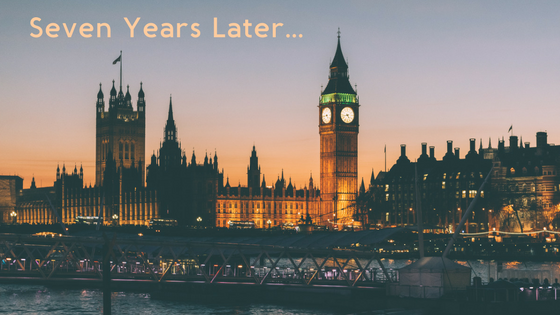 In 2010 I moved to London with three suitcases, no savings, zero cooking skills and no idea how I was going to get through the next three years. It’s safe to say that it’s been one heck of a ride.

I grew up in the city of Cork, Ireland and at the age of 18, after finishing school, I moved to the big smoke to fulfill my dream of becoming a professional dancer. I attended Millennium Performing Arts where I trained for three years. There were times during those three years when I wanted to give up. When I wanted to pack my bags and move home. Not because I’d stopped loving dance, but because the pressures of London life were becoming too much.

Seven years later, I still haven’t budged. I’m 25 years old, a dance diploma graduate and fortunate enough to be working within my chosen profession. London has dealt me my greatest achievements and my biggest heartbreaks. I’ve found myself, forgotten myself and then found myself all over again in this city. I’ve fallen in love in this city and I’ve lost love in this city. I’ve made friends here and I’ve lost friends here. My journey in dance is my journey in life. It is a reflection of my story. My journey here has taken me to many places. London has been my stepping stone to travelling Europe, Canada, The U.S. & Asia. It has also led to to many places within myself. Moving to this city has birthed so many encounters & experiences previously inconceivable that it inspires me to share the importance of acting out in the face of adversity.

It’s no secret that I like being in charge. Particularly when it comes to my own life. I’ve always believed that nobody but yourself is responsible for your happiness. London can be a tough city. You can choose to let it make you or break you. The biggest lesson I have learned from living here for the past seven years is that the relationship you have with yourself is the most important one you will ever foster. The bustle of London can ironically prove to be quite lonely if you don’t know yourself very well. Those of us who are artists in this city have the added challenge of discovering who we are while progressing in an industry that breeds comparison and ideals. You can choose to be your own best friend or you can choose to be your own worst enemy. Let the city make you, or let it break you. It’s your choice.

London has been a vascillating, consequential love affair in my life. More often than not it’s been tough. But there is something to be said for tough loves. They sometimes bare fruit if we but commit to ourselves enough. If there is anything London has taught me it’s that you don’t have to know HOW you’ll do something, you just need to believe that you WILL. As someone who is notorious for always looking for the entire staircase, I’ve made it my practice to begin by looking instead for the next step. It is these small steps that we take that ultimately carve the story of our life. It may have taken seven years but after seven years of adherence to goals both professional & personal (mixed with a whole lot of stubbornness) this city finally feels like home.

Cheers mate, you’ve officially made a Londoner out of me!